New COVID restrictions take effect from Monday 13th December. For the most part, our services will remain unaffected, our customer and repairs teams will be working as usual. However, due to the amended restrictions more of us are having to work from home. This means that customers who would like to meet with us in person in the office must book an appointment in advance.
Navigation

Our first property was 220 Hammersmith Grove. We paid £5000 and spent the same again 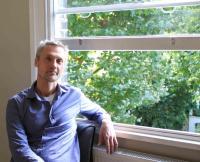 coverting it into four flats. It is still four flats. One is home to Fred Burlage who has lived at there since 2004.

He said: “I was chuffed to bits when I found out that I’m living in the first property owned by the association. For many years I was part of the Downtown Housing Co-op. Our members used to live in empty properties on short tenancies while they were being renovated or prepared for a new tenant.
“The association received rent and, by being there, we deterred squatters. In return the association gave the co-op one permanent tenancy a year which I was awarded 1995. By coincidence, when I was treasurer of the co-op we used to hold our meetings next door to where I live now.”